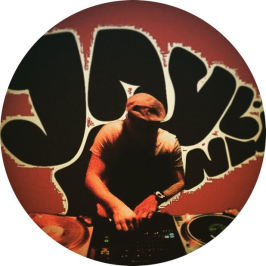 JAYL FUNK is without a doubt one of the most important producers/djs of the Funk/Funky-Breaks scene! Hailing from Nuremberg, Germany he had first appeared in the scene back in 2008 and since then he never looked back. He managed to build a really strong profile in the scene with killer releases for labels like TIMEWARP MUSIC, BREAKBEAT PARADISE RECORDS, MANMADE RECORDS, BIGM PRODUCTIONS and our label (check out his killer singles and the rather excellent album “WE GOT THE FUNK” released back in 2012 for BOMBASTIC JAM!), launched his own label (HONKEYPHONK RECORDS) in order to Keep The Funk Alive while his TRUFUNK RECORDS booties gained a lot of success! This is his new EP, a dash of fresh funky air, pure Summer-ish vibe, proper twisted, and dope awesome. JAYL FUNK's taking us a trip Across The Sea with ultra funky flavor, demand to Close Our Eyes and dance to the funky groove while he's coming out with the hottest n' sexier piece of every Summer party....this is How You Like baby!

Holding down the funky breaks scene in Europe right now is one of the top artists representing the label. Jayl Funk is back again to firmly cement his name in the game once and for all with his new storming release on Bombastic Jam “Get Down on the Floor”. The package consists of one of the most solid originals to date on the label, accompanied by 3 dope remixes – 2 of which coming from the man behind the label; George Fotiadis AKA Basement Freaks – A factory standard funky number straight outta the freaky basement, and a world first Basement Freaks Moombahton remix – George quickly catching on to “whats what” in music, as Moombahton is fast gaining a solid fan base with its popularity taking the electronic scene by storm worldwide. Tim McVicar steps up to the plate reworking the final remix on the release with a massive jam, which will be sure to be heard for a long time coming in clubs and festivals globally.

Funky breaks cut from the Nurnberg producer – accompanied by four remixes from the likes of Basement Freaks , CaZ, J-Roc of the Sould Out DJs and Quincy Jointz.